Springer Nature
Behind the Paper, Flatchat

Du Xiang (Research Fellow) and Prof. Wei Chen, National University of Singapore
Materials Community
Community Support, Springer Nature
Follow
Like Be the first to like this
0

1) Could you briefly outline the key findings of your paper?

Reply: Optoelectronic memory (OEM) plays a vital role in modern semiconductor industry. The fast emerging requirements for device miniaturization and structural flexibility have diverted research interest to two-dimensional (2D) thin layered materials. However, the OEMs fabricated by 2D crystals still suffer from poor data storage capability. We report a multi-bit non-volatile optoelectronic memory based on a heterostructure of monolayer tungsten diselenide (WSe2) and few-layer hexagonal boron nitride (h-BN). Our WSe2/h-BN OEM exhibits a memory switching ratio approximating 1.1×106, which ensures over 128 (7 bit) distinct storage states. The memory device also demonstrates excellent performance for data retention (over 4.5×104 s) and cyclic endurance (exceeding 200 cycles). Surprisingly, we found the spectrum distinction ability of the WSe2/h-BN OEM, which enables its application in filter-free color image sensor. We further validated this concept through the fabrication of integrated WSe2/h-BN pixel matrix which captured a specific image recording the three primary colors (red, green, and blue). Besides, we also demonstrate that such heterostructure architecture is applicable to other 2D materials, which is confirmed by the realization of black phosphorus (BP)/h-BN OME.

2) What is your role in this work?

Reply: I, along with my colleague Dr. Tao Liu, and my supervisor Prof. Wei Chen conceived and designed the project. Dr. Tao Liu and I carried out the device fabrication and measurements. All authors discussed the results and commented on the manuscript.

3) What was the genesis of this paper?  How did you come to this particular problem?

Reply: OEM is an essential component in modern semiconductor industry, which can be applied for image capturing, confidential information recording, and logic data processing. In the past years, we have witnessed the exponential advances of silicon-based non-volatile OEMs. However, as we know, the continued device miniaturization and the feasibility of integration into flexible, wearable, and transparent circuits will greatly restrict the development of conventional silicon-based electronics and optoelectronics.

2D van der Waals crystals derived from transition metal dichalcogenides (TMDs) are promising building blocks for the next-generation electronic and optoelectronic devices. The 2D thin layered structure enables their immunity against the short channel effects, while the mechanical strength and structural flatness allow their integration into flexible and wearable circuits. The 2D TMDs based photodetectors and photodiodes have been widely investigated, while the non-volatile OEMs fabricated by these materials are rarely studied. Mechanically exfoliated few-layer copper indium selenide was firstly applied in 2D thin layered OEM, published in Nano Lett. in 2014, however, the short retention time (approximately 50 s) and low current switching ratio (less than 10) hindered its application in image sensing. Since then, most research on 2D OEMs is focused on substrate or van der Waals heterostructure engineering, whereas the 2D OEMs still suffer from poor data storage capability.

Our group has long been focused on developing the surface/interface engineering techniques on 2D layered materials, as well as these materials based electronic and optoelectronic devices. In 2014, it was discovered that the mid-gap states in h-BN can be photoexcited, which thereby induces non-volatile doping effect in graphene on top. Nevertheless, graphene lacks an intrinsic bandgap, which severely limits its application in logic devices. We believe that the TMDs/h-BN OEMs with large storage capacity can be realized by exciting the mid-gap states in h-BN due to the naturally existed large bandgap in TMDs. Therefore, in the follow up experiment in this paper, we fabricated the WSe2/h-BN heterostructure and investigated the performance of the WSe2/h-BN OEM.

4) What is the most empowering implication of your results?

Reply: Our results have some important implications for the development of 2D electronic and optoelectronic devices. Firstly, our discovery of 2D thin layered heterostructure based OEM provides a simple method to achieve multi-bit memory device with outstanding data storage capability. Secondly, we have realized WSe2/h-BN pixel matrix by using chemical vapor deposition (CVD) grown WSe2, indicating the possibility of fabricating 2D thin layered image sensors in integrated circuit, which may pave the way for the next generation optoelectronic memories. Thirdly, in addition to 2D memory, the photoinduced non-volatile and programmable doping effect in TMDs and BP by using the mid-gap states in h-BN can also enable the flexible design of other 2D logic units, such p-n junction and complementary inverter.

5) How have 2D materials been uniquely instrumental to enabling these results?

Reply: 2D materials provide a unique platform for us to achieve the heterostructure configuration based high performance OEM. Firstly, 2D layered materials in which adjacent layers interact by van der Waals forces can enable the combination of various 2D crystals with different electrical and optical properties. In this work, we combined 2D h-BN and WSe2 to form the van der Waals heterostructure, in which h-BN behaves as gate dielectric and photosensitive medium simultaneously, and WSe2 is used as a carrier for charge storage. Moreover, the 2D flat structure of h-BN and WSe2 makes it possible to conveniently fabricate WSe2/h-BN pixel matrix by using standard lithography and etching techniques in our work. This indicates the great potential of applying our 2D heterostructure memory in integrated circuits in the future.

6) Can you describe the main challenges associated to the preparation of this manuscript? Any anecdotes you’d like to share with us?

Reply: The main challenge is to optimize the transfer process to ensure the clean interface between WSe2 and h-BN. In our work, the photon-generated electrons from the mid-gap donor-like states of BN transfer into WSe2 under negative gate, and lead to the storage of localized positive charges in middle of the BN bandgap, which can serve as effective local gate to modulate the transport behavior of WSe2. If the photon-generated electrons are trapped by the residue- or bubble-induced trapping states at the WSe2/h-BN interface, the modulation efficiency of the local gate in h-BN would be severely degraded, which in turn, results in poor data storage of the WSe2/h-BN memory. To ensure the clean interface, we transferred the WSe2 flake on PDMS substrate onto the h-BN very slowly. Moreover, after the transfer process, we annealed the heterostructure in H2/Ar (10%) atmosphere for 5 hours to release the bubbles at the WSe2/h-BN interface. However, we still encounter the problem to ensure all the samples have a clean interface.

7) Anything that stroke you as particularly surprising, unexpectedly pleasant/unpleasant during the peer review process?

Reply: There are a lot of impressive 2D papers published in 2017/2018. However, speaking of the favourite one, I think it should be the paper reported by Y. Liu et al. in Nature 557, 696–700 (2018). As we know, the junctions formed at the interface between metal contacts and semiconductor materials play a vital role in determining the performance of electronic and optoelectronic devices. Metal–semiconductor junctions are characterized by an energy barrier known as the Schottky barrier, whose height can, in the ideal case, be predicted by the Schottky–Mott rule on the basis of the relative alignment of energy levels. However, such ideal physics has rarely been experimentally realized because of the inevitable chemical disorder and Fermi-level pinning at metal–semiconductor interfaces. This paper reports the creation of van der Waals metal–semiconductor junctions in which atomically flat metal thin films are transferred onto 2D semiconductors without direct chemical bonding, creating an interface that is essentially free from chemical disorder and Fermilevel pinning. It not only validates the fundamental limit of ideal metal–semiconductor interfaces, but also defines a general, low-energy metal integration approach that may be extended to other delicate materials that would be damaged by aggressive contact fabrication processes or to other functional interfaces or junctions (for example, magnetic–semiconductor or superconductor–semiconductor junctions) that were previously limited by interface disorder.

9) Which is the development in the field of 2D materials that you would like to see in the next 10 years?

Reply: The last few years have seen a surge of extensive research on 2D materials. The fundamental properties of some typical 2D materials, including graphene, TMDs, and black phosphorus (BP) have been well-understood. In addition, the interface engineering techniques which can precisely modulate the electrical and optical properties of 2D materials have been established. However, there is still a huge gap to apply 2D materials in real life due to the low quality and small scale of 2D crystals. To commercialize 2D materials, the synthesis of high quality 2D crystals in large scale is of great significance. Silicon could still be the fundamental material for commercial electronics and optoelectronics in the next 10 years. However, 2D materials have some unique applications which are more superior than silicon, such as transparent and flexible electronics. The development of the 2D materials in these specific areas for practical applications should be a focus in the following years.

Reply: As discussed above, we are still working on measuring the programming speed of the WSe2/h-BN memory by using ultrafast laser beam. In addition to memory device, we also plan to design and fabricate 2D integrated logic circuits by using this photodoping technique. Moreover, we want to investigate whether these heterostructure based memory and logic devices can function properly on flexible substrates.

How do I add a video to my blog post?

How can I update my pronouns?

How to write an engaging Behind the Paper post

Welcome to the Materials Community 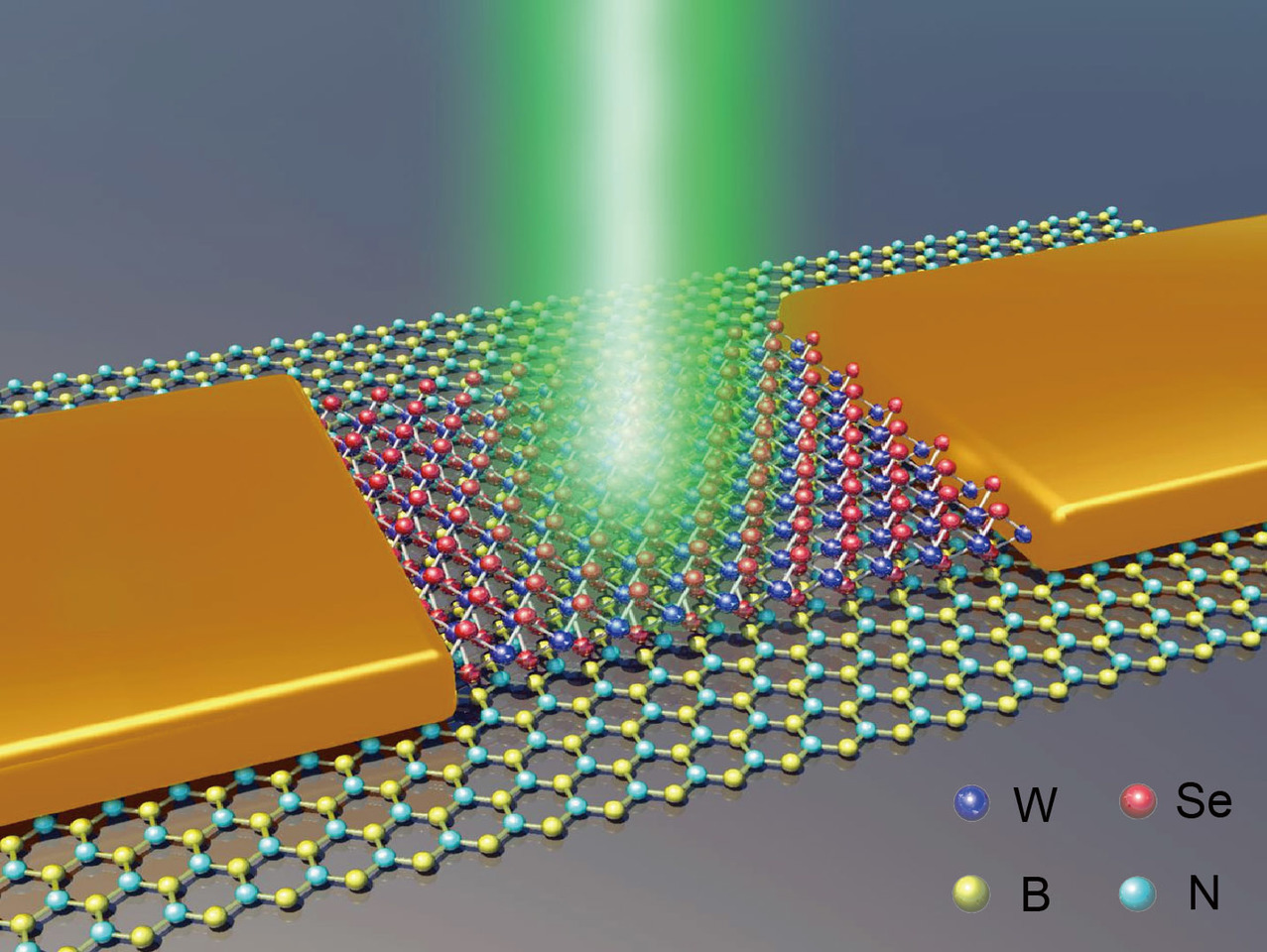