Internalization of SWCNTs in cyanobacteria

This work explores the spontaneous internalization of SWCNTs in cyanobacteria, autofluorescent prokaryotes capable of solar harvesting via photosynthesis. We engineered fluorescent SWCNTs to internalize by non-covalently functionalizing their surfaces with lysozyme. The observed uptake was length-dependent, with shorter SWCNTs showing greater internalization. We constructed a custom-built, spinning-disc confocal microscope that operates at near-infrared wavelengths to image the spatiotemporal distribution of the SWCNTs in real time. The internalization of the SWCNTs in the cells was additionally confirmed through confocal Raman spectroscopy, transmission electron microscopy (TEM), and selective chemical quenching of non-cytosol SWCNTs.

Study of the internalization mechanism

In addition to the wrapping effects, we also examined the effects of cell type. We compared the internalization of the SWCNTs  in Synechocystis sp. PCC 6803, a unicellular species, to that of Nostoc sp., a filamentous species capable of cell differentiation that lacks natural competence for DNA uptake. Both cell types showed internalization. Internalization was also observed in a mutant Synechocystis strain lacking type IV pili. These observations indicate the uptake mechanism to be independent of the presence of pili and independent of the cell's natural competence for DNA uptake. The internalization was also compared to differentiated Nostoc cells, where we observed a preferential uptake of the SWCNTs in heterocysts compared to vegetative cells. Considering the differences in surface charge of these cells, along with the variable uptake observed for Synechocystis cells at different growth stages that vary in surface charge, these observations collectively point towards an internalization mechanism triggered by charge interactions.

We further examined the effects of SWCNT uptake on cell viability. We observed light-dependent oxygen evolution from the nanobionic cells that is reflective of  sustained photosynthetic activity. We further confirmed the oxygen evolution rates to be comparable to the unmodified cells. These findings show that the SWCNTs do not negatively affect the photosynthetic activity of the cells under the tested conditions.

The effects on cell division was also monitored through colony growth. We observed continued colony growth of the cells incubated with SWCNTs. Though the nanobionic cells showed diminished growth rates compared to unmodified cells, growth rates were recovered under higher fluence. These findings suggest that the SWCNTs may contribute to competitive light absorption under low light conditions. The diminished growth rates observed under low light conditions, however, raised the question as to whether the cell growth may be due to the exclusive division of a fraction of cells that did not uptake the SWCNTs, as opposed to the diminished growth of the nanobionic cells.

We further demonstrated the application of these nanobionic cells in a living photovoltaic. Chronoamperometry measurements were taken under alternating light-on and light-off conditions. We observed a concentration-dependent increase in photocurrent with increasing SWCNT concentrations, achieving up to a 15-fold enhancement in photocurrent from the nanobionic cells compared to the unmodified cells. Atomic form microscopy (AFM) measurements of the electrode showed a filamentous-like bridging of the nanobionic cells on the electrode surface, an observation that was further corroborated by complementary near-infrared and visible fluorescence imaging of the cells. Electrochemical impedance spectroscopy (EIS) confirmed a decrease in the impedance of the electrode for cells incubated with SWCNTs compared to unmodified cells. The resulting decrease in resistance is believed to at least partially contribute to the observed enhancement in photocurrent.

The formation of this extracellular filamentous network was observed for both cells incubated in the presence of internalized SWCNTs as well as cells incubated with SWCNTs functionalized with wrappings that showed negligible internalization. Despite the similar formation of this network, the internalized SWCNTs showed a larger increase in photocurrent. This difference is attributed to facilitated extracellular charge transfer of the nanobionic cells.

This study presents a new exploration in the field of "inherited nanobionics" - the cross-generational inheritance of artificial characteristics that are unfounded in nature. We demonstrate the inherited nanobionics of cells infused with SWCNTs. These nanobionic cells show an indefinitely stable near-infrared fluorescence that is distinct from the fluorescence of natural living systems. This fluorescence was used to monitor cell division and track membrane reallocation across multiple generations. The nanobionic cells also show enhanced photocurrent, enabling applications in living photovoltaics. Beyond the imaging and energy applications demonstrated herein, this study opens the doors to new sensing applications that take advantage of the near-infrared wavelengths that are readily distinguishable from the cell's visible autofluorescence. The internalization of SWCNTs in prokaryotes represents only the first step in translating existing technologies and even unlocking new advancements in a previously unexplored phylogenetic kingdom. 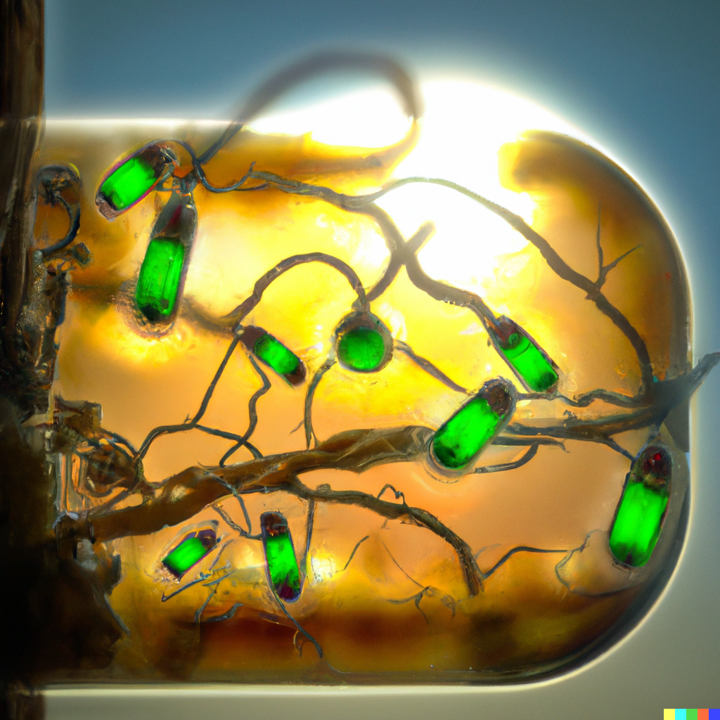