Contributor Comms Materials
Behind the Paper

Nanomechanical studies show that humidity increases the elastic modulus and decreases the hardness of lead halid perovskites, contrary to what is known for other materials. The result is correlated to trends in bond length, hydrogen bonding, and polarizability / polarization power of the ions.
Sidney Cohen, Irit Rosenhek Goldian & david cahen
3 contributors
Like Liked by Evelina Satkevic and 2 others
0

Humidity can change the properties of halide perovskites used in functional devices. Here, indentation experiments reveal that humidity causes an increase in elastic modulus and a decrease in hardness, which is correlated to bond length, hydrogen bonding and polarizability of the ions.

With a solar to electrical energy conversion performance close to or even better than the best commercial solar panel materials, halide perovskites, HaPs, have been hailed as the most promising family of materials for improving solar panels, and for a number of other optoelectronic applications.  They are easily formed into thin-film devices by simple chemistry, making them much cheaper than today’s dominant, silicon-based cells. However, their sensitivity to our earth’s atmosphere is a serious cloud hanging over them, a barrier to their commercial implementation. Especially problematic is the effect of humidity, at times found to improve cells, but mostly leading to degradation of the HaPs. Such flip-flop behavior is puzzling and confusing, and an impediment in getting devices to market.

The ease of making the materials and their ready formation into very thin films also makes HaPs attractive for flexible device applications.  That directly puts the spotlight on their mechanical behavior: while we want flexible devices, we do not want them to dissolve or otherwise disintegrate, begging the question of how HaPs will withstand deformation.  Mechanics, as it relates to structural effects at the micro-scale, is intimately linked to the optoelectronic properties of the HaPs; hence, it holds great potential for characterizing the molecular basis for the outstanding photovoltaic performance of these materials. Our experiments and analyses, reported in our just published paper in  Communications Materials, directly tackle the link between molecular structure/bonding and mechanics in the presence of water vapor. The results are interpreted through consideration of the unique atomic-level structure of these crystals.

In the perovskite structure of these ABX3 materials B is an inorganic cation (in our case, lead) and X a halide ion.  BX6 octahedra form a corner-sharing framework with A-cations in their cavity. When the A cation is an organic moiety, it is also termed a hybrid organic-inorganic perovskite (HOIP). Although the BX framework provides most of the structural rigidity (and dominates its electronic structure and properties), the A cation in Pb-HaPs serves a less-defined role, likely involving dynamical formation and healing of defects. Water molecules, upon exposure to the crystal, can penetrate the crystalline structure, fill the cavities, as well as form hydrogen bonds. The resulting changes in the mechanics are of fundamental importance and relevant for the synthesis, processing, durability and function of HOIP devices.

In order to investigate the impact of water on mechanics of HaPs, we designed a series of experiments to systematically measure the elastic modulus and hardness at/near the surface and in the bulk under dry and humid conditions, for two series of HaPs – one varying the A cation (including both organic ones methylammonium, MA, and formamidinium, FA, as well as inorganic Cesium), and with X= chloride, bromide or iodide. The humidity exposure was controlled to achieve mild hydration which allowed reversing the humidity-induced changes in modulus and hardness upon drying. Modulus is an intrinsic material property, related to the bond stiffness. Hardness is an engineering factor describing the tendency to permanent deformation under load. Nonetheless, the two are highly positively correlated for most known materials. Surprisingly, we find an intriguing inverse relation between absolute values of modulus and hardness, as well as for their change with humidity. Understanding these trends required delving into the expected changes in molecular structure upon water adsorption, and subjecting the indentation data to non-conventional analyses.

The nanomechanical data were acquired using two independent techniques –  instrumented nanoindentation and atomic force microscopy, the latter being more sensitive to the near surface, the former more to the bulk.  The figures below show the changes in modulus between dry, and humid conditions in the bulk  (a) and on the surface (b), for the series of HaPs that were studied.

The trends in modulus can be explained by the polarizability of the X-site anion (by the cations) and the polarization, resulting from (or polarizing power of) the A-site cation on the halide anions for near-surface measurements. However, such is not the case for the bulk results, i.e., a positive correlation of modulus with polarizability/polarization at the surface, but not in the bulk. These interactions with water resulted in enhanced ability for structural stiffening governing the modulus change at and near the surface, or conversely in the bulk depending on the specific crystal. We discuss the versatile role of water in dictating this behavior through bonding and electrostatic interactions, as well as contribution to lattice strain.

Strikingly, the modulus change at the surface between dry and humid conditions for MAPbI3, is six times greater than in the bulk, while for CsPbBr3 and MaPbCl3 there is no difference, and for FAPbBr3 the change is greatest in the bulk.  As mentioned above, the stiffening observed under humid conditions is counter to what occurs for most materials. This anomolous behavior is not mimicked in the hardness measurements, where the commonly observed softening upon humidity exposure was observed (Figure 2).

A central part of our work is the attention to understanding the nanoindentation data using several alternate analyses. This allowed insights into the unique and unusual nature of the elastic events. Full details can be found in the latest volume of Comms Mater at https://doi.org/10.1038/s43246-022-00287-7. 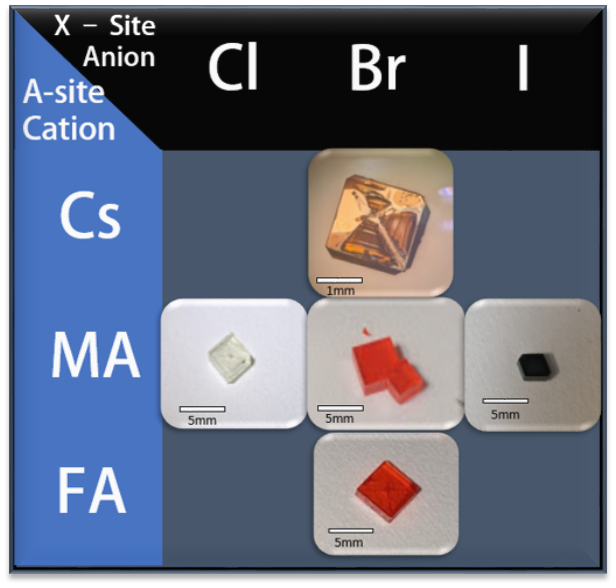 Nanomechanical studies show that humidity increases the elastic modulus and decreases the hardness of lead halid perovskites, contrary to what is known for other materials. The result is correlated to trends in bond length, hydrogen bonding, and polarizability / polarization power of the ions.