Epitaxy on nanopatterned graphene enables the realization of a broad spectrum of freestanding single-crystalline membranes with substantially reduced defects.

In 2017, a novel method of single-crystalline material growth and its layer transfer through the atomically thin graphene interlayer, so-called remote epitaxy, was first developed by Prof. Jeehwan Kim’s group at MIT. This technology is regarded as a versatile approach to revolutionize heterogeneous integration strategies because heterointegration has been limited so far due to the stringent lattice and processing restrictions. However, despite great advances in key attributes required for heterointegration techniques including universality, throughput, and controllability, the concept of remote epitaxy is not applicable to non-polar materials. Because the ionicity of materials strongly governs a distant atomic interaction between the substrate and epitaxial film, elemental semiconductors such as Si and Ge cannot be utilized as epitaxial layers or growth templates in remote epitaxy although they are one of the mainstream material components in both traditional and modern electronics and photonics.

To address the major challenge in remote epitaxy, we proposed an alternative epitaxy platform that can be universally employed to produce a wide variety of freestanding single-crystalline membranes, ranging from non-polar to polar materials and from low-bandgap to high-bandgap semiconductors. As schematically illustrated in Figure 1, a systematically engineered graphene nanopattern plays a critical role in accommodating both high-quality film growth and exfoliation at the graphene interface in our new approach. When the underlying substrate is partially exposed along the patterned area of graphene, the epitaxial material species are directed to such regions instead of being randomly distributed on the graphene surface. As the growth proceeds, the islands selectively nucleated in the openings are merged into a continuous film by lateral overgrowth, which allows the epitaxial layer to be single-crystalline regardless of the polarity of materials. Such an epitaxial film can also be released from the substrate when the graphene coverage is high enough to effectively weaken the interface. Based on this concept, we demonstrated that single-crystalline epitaxial layer of GaAs can be completely peeled off from two-inch wafer of Ge coated with the optimally designed graphene nanopattern. A simple idea of introducing nanoscale periodic openings in graphene thus solved a fundamental bottleneck that had limited remote epitaxy to be applied to non-polar materials.

More surprisingly, we found an additional, yet far-reaching, benefit of nanopatterned graphene interlayer in polarity- and lattice-mismatched heteroepitaxial systems, where it substantially reduces crystallographic defects such as antiphase boundaries, misfit dislocations, and threading dislocations. Although antiphase boundaries are in general unavoidable in compound semiconductor films grown on elemental substrates, nanopatterned graphene effectively eliminates the formation of such defects in GaAs epitaxial layer on Ge substrate when its step edges are blocked by the graphene surface. Light-emitting diodes made up of antiphase boundary-free thin films thus show superior optoelectronic properties compared to its counterpart directly formed on bare Ge substrate (Figure 2). Moreover, a combined experimental and theoretical study revealed that graphene nanopattern serves as an efficient platform to relax misfit strain and therefore significantly reduces defects by a unique mechanism mainly attributed to the flexibility and chemical inertness of graphene surface. As described in Figure 3, our graphene nanopattern promotes the ultimate reduction of dislocations beyond the conventional approaches including direct heteroepitaxy and SiO2 mask-based selective-area epitaxy in the same lattice-mismatched system. Thus, these new findings in this work could suggest an additional promising route towards expanding the material spectrum of freestanding membranes in high quality.

Our new strategy proposed herein can be leveraged to provide access to a more extensive library of high-quality freestanding membranes of both elemental and compound semiconductors, which will open up new opportunities in heterogeneous integration of electronic components that have not been structurally or chemically compatible with each other. In the same vein, we expect graphene nanopattern-based epitaxy platform can offer a fertile ground for the exploration of unique heterointegrated systems that may exhibit unprecedented physical phenomena at exotic interfaces as well as multiple functions in a single device. 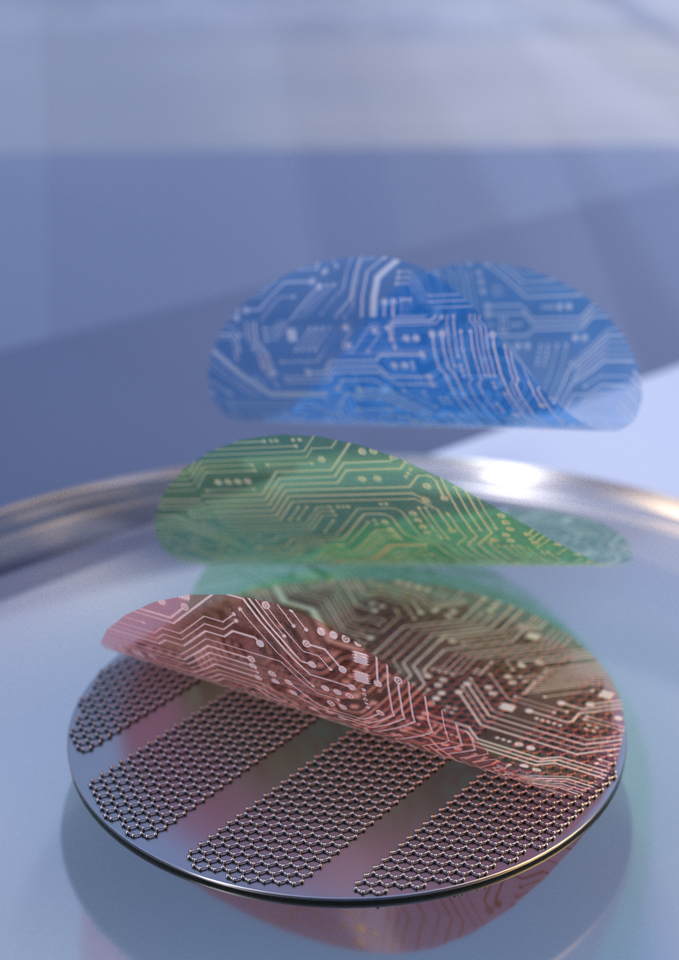